While researching for our new series on the book of Esther, I came across a particularly interesting passage:

The opening chapters of Esther are a bit like the elegant opening moves of a chess game, in which the direction and movement are established, with each piece in its position. As we enter this decadent Persian court, King Ahasuerus is introduced in all his royal but ineffective pomp; Queen Vashti is deposed and Queen Esther crowned; and Esther's cousin Mordecai serves the king and foils a plot against him. All these "pieces" of the plot must be in place just so, in order for the action to proceed as it does throughout the rest of the book. What seems like a self-contained drama in the palace of King Ahasuerus is really the introduction to a much larger drama, one that stretches as far as the survival of God's people. (Nielson 49)

For me, the word "chess" almost always triggers memories of my grandpa, with whom I connected through playing Korean chess.

After over a decade of my childhood spent in the United States, I visited my grandparents in Korea, and I was intrigued by this wooden board with plastic pieces. My Korean language skills weren't very good, and I struggled to understand what my grandpa meant as he explained the intricacies of the game. More unfortunate was that the pieces weren't even labelled in Korean, but in Chinese. I could only learn the game through memorising what the symbols looked like, and mimicking what my grandpa did. 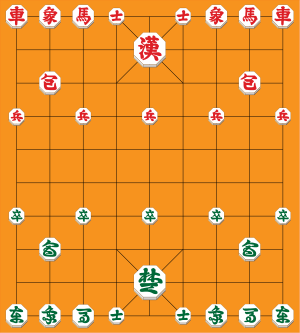 (If you can't read what these pieces mean, you're in the same non-Chinese speaking boat as me)

"Elegant opening moves" were definitely not part of my repertoire. To me, an adolescent who grew up playing checkers and video games, moves were just moves. I just knew that I had to attack the other side of the board. I had neither the knowledge nor the patience to set up future moves and weigh the risk of what I was doing, and my lack of foresight showed as my grandpa gleefully decimated my army of haphazardly moved pieces.

This isn't far off from what we see with the characters in the opening chapters of Esther. All of the main players seem to act without much clear thought beyond what is directly in front of them. They are ruled by their passions, and though constantly vying for more control, they are ironically lacking in self-control.

In fact, the person who supposedly wields the highest authority in the land, King Ahasuerus, is exposed repeatedly to be actually quite powerless. He cannot handle the affairs of his immediate family, requiring advice from a group of wise men after his wife refuses to obey his commands—and rather than considering their advice in order to form his own decisions, he just thoughtlessly carries out exactly what he is told to do!

These actions give him the illusion of control in the immediate situation. Vashti is removed from her post as queen immediately, and Ahasuerus has the pick of the land when it comes to the new queen. He can now fool himself into believing he has acted with wisdom and foresight, but his hubris is reminiscent of how an amateur chess player might feel. We the readers can see that the king's actions highlight his powerlessness.

In the king's case, we have the benefit of seeing an overview of the whole story. But how often have we been like the king in our own lives? We try to exert control over our finances, our relationships and the culture we live in, but the means that we use are not well-thought out chess moves. They are rather more akin to rash and reckless actions and reactions, and we find that the result is that our figurative "armies" are left wiped out, and we ourselves are left frustrated and feeling helpless.

Perhaps this is the moment when we can take a step back, as we did with King Ahasuerus, and look at the bigger picture of what God is doing. His wisdom infinitely outstrips ours, and His ways are higher. The hours we spent poring over every aspect of our lives in order to gain some sort of control, only to find that we are not sovereign over our own lives can be redeemed by seeing the hand of God at work, even teaching us a valuable lesson in His sovereignty. It is perhaps appropriate to echo the psalmist's words in Psalm 73:22 here:

I was so foolish and ignorant—

I must have seemed like a senseless animal to you.

The rash decisions that Ahasuerus makes show the almost imperceptible fingerprints of God as the story of Esther unfolds. We see the way God's unfailing love for His people has orchestrated everything that happens in order to ensure their survival. His power, wisdom and ability contrast starkly with the ineffectual and drunken actions of the king.

I learned many valuable lessons as I continued to play chess with my grandpa. I studied what he did, and in my rudimentary Korean, asked him why he made certain moves. Eventually, I even won a couple of games (although I suspect that he might have let me win).

We can do a similar thing in our lives with God. If you are having trouble with control (and who isn't?), ask God for help. Study what He is doing in your life, and ask Him why He moves in the ways that He does. Even if you struggle with prayer, even if you feel as though you lack the basic vocabulary to speak to God about certain things, try—He is far more patient than even my grandpa was when he was trying to teach me chess in a language I barely spoke.

Yet I still belong to you;

you hold my right hand.

You guide me with your counsel,

leading me to a glorious destiny.

Whom have I in heaven but you?

I desire you more than anything on earth.

My health may fail, and my spirit may grow weak,

but God remains the strength of my heart;

he is mine forever.

May our knees bow and our lips sing praise,